This letter is written to our fat community to express great concern over what appears to be a growing divide among us.

We continue to see fat activism growing and our community expanding, and while this brings great joy, it also becomes more and more apparent that we are not doing the work to prevent our community from being divided along race and socio-economic lines. We are not having the hard conversation needed to build the truly solid foundation of inclusivity and diversity that we rest much of our argument of anti-oppression upon. This is particularly important since both government programs and the diet industry have been specifically singling out and targeting people of color in recent campaigns. From Michelle Obama’s selection of Beyonce Knowles as the face of her national campaign against obese children to the disproportionate number of children of color represented in the state of Georgia’s “Strong4Life” campaign, the face of the “obesity epidemic” in public policy has largely become people of color. Similarly, the diet industry has focused several of its most recent national advertising campaigns around African American celebrity icons, including the selection of Janet Jackson as a representative of Nutria System, and Charles Barkley and Jennifer Hudson as spokespeople for Weight Watchers.

While fat activism in the United States continues to be predominantly white, there is an emerging wave of fat People of Color (POC) activists moving out into all aspects of our communities. Joining with fat POC activists who have been working for years to create space for the unique challenges faced by POC within our mainstream diet culture, this has the potential to be a time of enormous shift in the perception and face of fat activism in the U.S. We are excited to be a part of this paradigm shift, and to see more of our experience reflected in the work of fat activism.

We hold grassroots organizing in high regard, because we know from experience that having established relationships with individuals aids in activating their enthusiasm for a project. While this is true, it also limits the reach of our work to our personal networks and circles. This is especially troublesome in the world of social media platforms like Facebook. Sending out an invitation for all contacts to participate is not the same as doing the thoughtful work of being inclusive, which requires planning, communication among groups, and transparency. Blanket invitation through social media, or “crowd sourcing,” returns a large response from those already closely related to the issue, who often share the initiator’s stance, privileges, and power.

This can be seen in the recent “Stand4Kids” campaign, most recently renamed the “I stand against weight bullying” campaign (seen here) launched by Marilyn Wann. This campaign is a great example of a provocative and direct action within the fat community, created to address fat shaming and body prejudice aimed at the children of Georgia through positive images of people of all sizes. The Georgia campaign “Strong4Life” (mentioned earlier in this letter) features a high number of children of color, and is being primarily aimed at children of color in Georgia’s poor neighborhoods. The primary organizer of “Stand4Kids/I stand against weight bullying” does not share these lived experiences, and while that truth does not mean that the organizer should not lead the project, it does raise a flag that the difference in experience between the organizer and the communities being addressed must be bridged in order to develop authentic and lasting relationships. Because the campaign launched through a crowd sourcing technique on Facebook, many of the first respondents were similarly white fat activists. As the campaign grew, it was reposted numerous times by many other white fat activists, none of whom were publicly critical of the lack of representation in the images and in the campaign’s design and implementation.

At that time, a group of POC fat activists began to discuss their disappointment at both the campaign and lack of critical response by the larger fat community. A person of color raised questions on the “Stand4Kids” tumblr about the tools used to make the project inclusive, the intent and possible effect of the projects in communities of color, and the ways in which these images would be used to support children of color in Georgia. The response was disappointing: these discussions had not happened within this project, and the commenter was told that if they wanted to support diversity within the project, they, as a person of color, should join the project’s Facebook page and offer solutions. More recently, the organizer of the campaign did address this posted concern to acknowledge that the proper outreach had not been done, and that she would take the questions posed on board.

As the project has grown and moved outside of its immediate sphere of contact, more and more people of color have began to participate. To date, the images on the “Stand4Kids/I stand against weight bullying” campaign site are still predominantly white individuals. Our critique of this campaign is not intended to imply that the campaign should not exist, that the organizers should not do the work, or that the images that have been created will not be effective in inspiring residents of Georgia to oppose the “Strong4Life” campaign. We offer this critique as one example of a fat activist action moving forward into a campaign without initial discussion of the inclusion of, or impact to, the communities it seeks to serve. Luckily, conversations can happen at many points during a movement; there are countless opportunities for growth, connection, and coalition.

The time has been long in the coming to again address the prevalent attitudes of socio-economic privilege and white-centric thought in fat activism. When open and authentic conversations about race and class fail to happen, we see these attitudes in the ways that people are left out of conversations. We see people who live with great privilege speaking as authorities on the impact of racism and classism, without basing their approach in the ally model. We see large size acceptance campaigns launched without coalition among diverse groups, thoughtful discussion around inclusivity, or well-versed allies on hand to help answer questions and facilitate community conversation. We see white allies depending heavily on POC and poor people to discern, direct, and implement the work of addressing these concerns within our communities only after or in response to work being presented that does not include their voices. We see white allies responding defensively and closing down conversations when presented with clear questions about taking steps to do their own work of finding ally mentors, addressing the ways their own acknowledged and unacknowledged privilege directly affects members of their community, and engaging in thoughtful dialogue about the interconnectedness of oppressions and the diverse ways those oppressions affect different members of our communities.

Overly simplified analogies of power and privilege are no longer the face of fat activism. We, as a large and diverse community with a vast wealth of life experiences and resources, can do better. We can go deeper; we can form authentic and strong coalition with one another.

Flying by the seat of your pants, when it comes to addressing the real concerns and questions around diversity and inclusion of POC in fat activist spaces or campaigns, will no longer be good enough.

We are looking forward to a stronger, more representational expression of fat community in which POC and poor people’s voices are heard, their experiences are respected, and their work to strengthen their individual communities is supported just as they work to support others.

Fat People Must Become a Priority to the Left (2019)

Desirability: Do You Really Love Fat People When You Can’t Even See Us Beyond The Political? (2019) 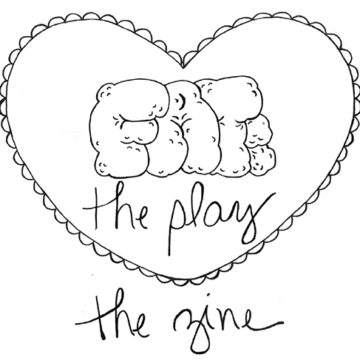