A speech delivered at the speak-out Resisting Fat Hatred

I have a sign on my kitchen wall. It says: Thank You for Not Talking About Your Diet. It continues: Please be considerate of other people. Please do not obsess about your weight in this area. I would like to see signs like this posted all over. It’s time we all stopped treating ourselves and other people as if we were morally obliged to criticize and demean ourselves because of our body size.

Let me tell you a little about the group I work with. The Council on Size & Weight Discrimination is a not-for proﬁt advocacy group that works to end discrimination based on body size, weight, or shape. We provide information and referral to those who are victims of weight discrimination on the job, we work with the medical and scientiﬁc communities to ensure fair and unbiased research and treatment, and we do public education to change our society’s prejudiced attitudes towards larger people.

Fatphobia and weight discrimination are based on the false assumption that a person could lose weight if they would simply “use will power and stop being so self-indulgent”. The scientiﬁc fact, conﬁrmed over and over in rigorous, controlled studies, and published in peer-reviewed journals, is that there is no currently known method of weight loss that is effective and permanent.

Forty two years ago, Dr. Albert Stunkard did the ﬁrst carefully done, controlled study of the outcomes of weight-loss diets His data showed that virtually none of those who lost weight were able to keep that weight off. (Stunkard, A. J., 1959. The Results of Treatment for Obesity. Archives of Internal Medicine, 103, 79-85.)

In 1986, Stunkard and others studied identical twins who were adopted into and raised by different families. Comparing those twins when they were adults, they were found to have similar or identical body weights to one another. This showed for the ﬁrst time that weight is in large part genetically determined, and that differences in family eating, exercise, and psychological patterns were much less signiﬁcant factors. (Stunkard, A. J. et al. 1986 An Adoption Study of Human Obesity. New England Journal of Medicine, 314, 193-198.)

Long-term studies are essential in the area of weight loss, since it is apparent that over time, more and more of the initial weight loss is inevitably regained. But most studies follow subjects for no more than one or two years. In 1996, however, researchers surveyed 192 participants in a commercial weight loss program-Optifast, a liquid meal replacement. Three years after completing the program, only 12% of the subjects had kept off the bulk (75%) of the weight they had lost. 57% maintained at least a small portion (5% or more of the loss). But 40% had gained back more than they had lost during the diet. For four out of ten people, the treatment had resulted in a weight gain. (Grodstein, Francine, ScD et al., 1996, Three-year Follow-up of Participants in a Commercial Weight Loss Program, Archives of Internal Medicine 156, 1302-1306.)

These results have just been duplicated using a different brand of meal replacement. Subjects regained an average of 73.4% of their weight loss during the 3 years after treatment. After 5 years, only 25% had maintained a weight loss of even 10% of initial weight. (Anderson, J. M. et al., Journal of the American College of Nutrition 18(6), Dec. 1999: 620-7.)

In 1992, the National Institutes of Health convened a Technology Assessment Conference to study which weight-loss methods were most effective.They reviewed more than 1,000 research papers on dieting and came to two major conclusions. They said that although heavier people do have greater risk for health problems, there was no evidence to prove that weight loss reduces that increased risk. Their second conclusion was that there are no diets that can be considered to be effective treatment in the long run. (National Institutes of Health Technology Assessment Conference Panel, “Methods for Voluntary Weight Loss and Control,” Annals of Internal Medicine, 116: 943-949.)

The editors of the New England Journal of Medicine wrote an editorial on January 1, 1998 (Vol. 338, No. 1) entitled “Losing Weight – An Ill-Fated New Year’s Resolution“. They noted that the evidence for the risks of obesity and the beneﬁts of weight loss were ambiguous and sometimes contradictory. They speculated that much of the health risks were not from obesity but rather from sedentary lifestyles regardless of body size. They noted that bodies have fairly stable setpoints. These setpoints can be overridden with severe dieting and vigorous exercise, but that

“when those extreme measures are discontinued, body weight generally returns to its preexisting level.”

Since there is currently no known method of weight loss that is safe, effective, and permanent. it is irresponsible for doctors to tell their patients that weight is their problem, that failure to maintain a weight loss is their own fault, or that they themselves are to blame for any and all of their health problems. It is obviously time for a paradigm shift. Doctors and other health professionals should be teaching their clients how to achieve better health at their current body weight. Nutrition education should replace calorie restriction, and making physical activity part of one’s lifestyle should replace exercise whose sole purpose is weight loss. And these programs need to be broad based, since they would improve everyone’s health. People must not be singled out for healthy lifestyle education simply because they are larger than average.

How did our culture become so obsessed with thinness? Some say it started with the advent of the motion picture, since ﬁlm makes people look heavier. Some say it was the advent of ready-to-wear clothing. Before 1900, all clothing was homemade or custom made, so differences in size were basically irrelevant. Once clothing came in standard sizes, anything outside the standard was a problem. Some say the medical community is to blame, since they have continued to stand behind the prescription of diets and diet drugs even in the face of the abysmal failure of those medical treatments. Some say it started as a backlash to feminism. As women became empowered, the male power structure insisted that women be petite, dainty, and concerned mostly with their appearance, so as not to threaten the men’s position of authority. Some say the fashion industry is behind it. Some think it is the media, who-even if they did not start the craze-are deﬁnitely guilty of exploiting it. Oprah’s battles with weight have sold millions of copies of tabloids. Women’s magazines tout new diets in every issue, right alongside recipes for rich desserts.

When you look for the origin of a cultural ideal in the United States, you must always ask one simple question: Who proﬁts? Who proﬁts from weight obsession, chronic and yo-yo dieting, and the social stigma against larger people? There is one culprit that earns the lion’s share of the blame for our culture’s hatred of fat people and gloriﬁcation of thinness. And that culprit is the weight-loss industry.

As our level of weight obsession rises, so do the proﬁts of the weight-loss industry. Diet programs, diet foods, diet soft drinks, and the highly proﬁtable diet drug portion of the pharmaceutical industry, bilk the American public out of somewhere between 30 and 60 billion dollars each year.

They thrive on the fact that most people trying to achieve a smaller body size will become chronic or yo-yo dieters. In fact, in one ad for a weight-loss franchise for sale, potential investors were told that they could count on”guaranteed repeat business”. In other words, they know their programs don’t work.. They vigorously promote the false notions that dieting is easy, that dieting is effective, that weight loss is permanent, that one’s body size is within one’s total control, and that becoming thin is the only way to be happy, healthy, attractive, popular, or successful.

American culture is protective of business and its proﬁts. Our protest movement won’t be likely to get supportive coverage from the media, because the media depends on the diet industry’s advertising dollars. The Council has had some success working with regulatory agencies, but the resulting guidelines for responsible business practices were not mandatory but merely suggested. There have been some minor victories. You may have noticed on TV ads for diet programs that they now have ﬁne print at the bottom of the screen. The image is of a woman whose “before” picture is not only fat, but also unsmiling, wearing ill-ﬁtting clothes, and looking haggard and lifeless. After joining the weight-loss program, the same woman is shown as 50 pounds thinner, active, fashionably dressed, and surrounded by friends and admirers. If you look very carefully, there are words at the bottom of the screen. They say: “Results not typical”. So far, that is the extent to which the government is willing to regulate the advertising claims of weight loss companies. Results not typical. Boy is that an understatement. If these programs had to state their actual long-term results, they would be revealed as the consumer frauds they are.

It’s not easy to ﬁght a Goliath like the weight-loss industry. But we have no choice. Our health, our lives, and our well-being depend on it. We need to challenge diet programs to disclose their rates of successful and long-term weight loss. We need to interrupt fatphobia and weight discrimination wherever and whenever we see them. We need to take action in our personal lives by getting off the diet roller coaster, and by encouraging others to stop their obsession with weight. We need to educate doctors, teachers, and the general public about the scientiﬁc facts. And we need to teach our children that they are beautiful, capable, and lovable at whatever size they happen to be.

This is an important struggle. It won’t be easy. But we can do it. We are ﬁghting for our lives, for our health, and for our well-being. In the words of the great anthropologist Margaret Mead, “Never doubt that a small group of thoughtful, committed citizens can change the world. Indeed, it’s the only thing that ever has.” 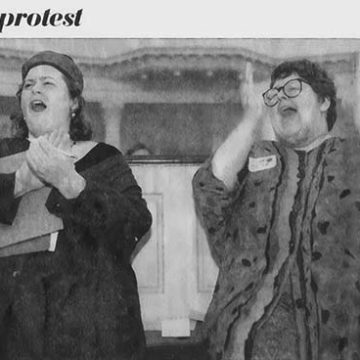 The Silent Tragedy: a brief overview of the non-diet paradigm to promote health for people of all sizes (2000)